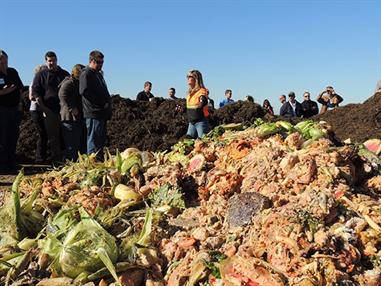 This is the first in an occasional series of California organics management Success Stories.

Soon after California passed its first waste diversion laws in 1989, the City of San Diego started making long-term plans to recycle organic materials. In 1990, it began a pilot program with two organic waste generators—the Marine Corps Recruitment Depot and a single grocery store—and established a small site at the Miramar landfill to compost the materials.

After establishing composting operations and customer training protocols, the program began to grow. New customers were added only after they were thoroughly educated on which materials are accepted and which are excluded. By 2007 many of the city’s iconic institutions had come on board, such as the San Diego Zoo and Sea World, the airport, several hospitals, a few large hotels, San Diego State University, and the city’s convention center.

Today, San Diego operates one of the largest municipally run composting sites in California—the Miramar Greenery. The residential green waste and commercial food waste collection programs that feed it are among the most comprehensive and well-implemented organics programs in California. Eighty large San Diego businesses participate in composting food materials, and 40 more are waiting to be added. However, the composting facility as designed cannot take more food material.

In 2016, the City of San Diego applied for a CalRecycle Organics Infrastructure Grant and was among the top-rated proposals. CalRecycle awarded the city $3 million to install and operate a covered aerated static pile system that will allow more food waste to be composted. Construction should start this year and be completed in 2019.

“Cleaning up the material at the source is way easier than cleaning it up on the back end with machinery or pickers,” said Burton Ewert, who manages Greenery operations. Ewert is a biologist by training who started out managing the revegetation of the landfill with plants grown at the Greenery Nursery.

Because 1 percent contamination in incoming feedstock is the program standard, city staff runs an intensive training program to stop contamination before it starts. All new customers must receive training before they receive organics pickup service. Environmental specialist Ana Carvalho, who designed, implemented, and oversaw the commercial food waste diversion program, visited each new customer at their business. She evaluated the customer’s organic waste stream, trained the staff on what materials are accepted, and helped them choose properly sized containers. The customer then contracted with the hauler to obtain a dumpster or cart and place it in the best location. Carvalho recently retired, but the program carries on. 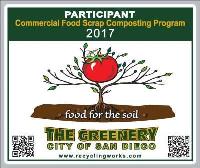 After receiving containers and training, new customers are placed on probation. During this period, they must deliver at least three loads meeting the Miramar Greenery’s maximum 1 percent contamination standard. The program also has zero tolerance for glass and chemicals. The probationary customer visits the Greenery each time their initial loads are dumped onto the tipping floor. Along with Greenery staff, they inspect the load for compliance, and staff points out if the customer has included any materials that are not accepted. An experienced Greenery operator confirms the 1 percent standard through visual inspection. At this time, the customer gets to tour the Greenery, if they haven’t already.

“We bring them to the Greenery to see the kind of work we do. When they see it, they become our best friends and allies,” said Carvalho. “We do everything we can to educate them. It’s very labor-intensive.” Because the new customers can see, smell, and fully experience what happens to the contents of their bin, they understand what is involved and therefore tend to be more committed to following the rules and providing clean materials. The Greenery does not allow bags—paper, plastic, and compostable bags are all considered contamination. Customers learn that “compostable” cups, cutlery, and packaging don’t always break down; they are not accepted. In fact, many items that seem similar to allowable items are not accepted. While coffee grounds and coffee filters are accepted, tea bags are not because many have a polyester string or a nylon bag. Kitchen paper towels and napkins are accepted, but restroom paper-towel waste is not, because it often is mixed with other materials. Parchment paper is allowed, but wax paper is not. The strict rules were determined over years of experience of what breaks down and what makes for a clean feedstock.

After Greenery staff are satisfied that they have full understanding and cooperation, the customer is removed from probation and their material can be composted without them being present. But the close watch on feedstock quality does not end.

“Every load that comes in gets looked at by our staff. We try to watch it as it comes out of the truck,” Carvalho added. “As we get into a load, sometimes there are contents disguised. But there are times we can pinpoint where it may be from.”

Most loads meet the contamination standard, but occasionally there are issues: Businesses get new workers who need to be trained, and longtime workers may need to be retrained. If any of the Greenery staff observes unacceptable materials in the load, the customer may be put back on probation. If a load is so contaminated that it needs to be landfilled, the city charges the municipal waste tipping fee, instead of the composting tipping fee. For city customers, the disposal fee for clean green and food materials is $5 per ton less than the fee for garbage. For non-city entities, the differential is $11, according to the city’s fee schedule.

So far, no customer has been canceled from the program. The trick to keeping everyone on board is to showcase success. As a thank you, customers receive kudos on the city’s website. Participants in the program receive a logo they can display to highlight their participation in the composting program. Carvalho also brings together organics customers for appreciation events and discussions.

“It’s not just us talking to them anymore,” she said. “It’s them talking to each other.” San Diego organics generators have earned those kudos, given how carefully they need to sort waste and the bin cleaning that a no-bag program entails. Even after an increase in the fee for organic waste service, the city has not had any customers decide to leave the program.

It may seem counterintuitive, but programs that reduce the amount of organic materials hitting the waste stream can support a compost facility. Most cities generate more food waste than they can compost and, as the wait list illustrates, San Diego is no exception. Also, reducing food waste can have even greater benefits than composting. As citizens are becoming more aware of the environmental and economic impacts of wasted food, businesses have stepped up to do their part, with assistance from the city. What started with edible surplus food going to food banks has grown into a full-fledged program to promote less waste during food production and donations when surplus edible food is available. 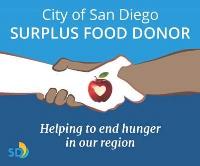 One large hotel in San Diego was generating more than 12,000 pounds of extra food a month. Through a 2016 meeting with Carvalho and an expert from a local food bank, they received further education on fine-tuning food orders and the legal protections available to food donors. Thanks to these interventions, the hotel reduced its surplus and now regularly donates 3,000 to 4,000 pounds of edible food a month to food banks for needy residents. City staff and local food banks continue to meet with large generators throughout the city, spreading the word about the impact of wasted food. Currently, 32 of the largest food waste generators in the city donate excess edible food on a regular basis. As with the composting customers, food donation customers receive a logo they can display to show their customers they donate food to hungry San Diegans.

Over the past 28 years, San Diego’s organic waste program has grown through hard work and incremental adjustments. The new infrastructure to be added to the Miramar Greenery with the support of GGRF funds will help the city continue to make quality soil amendments while safely and effectively managing its organic waste. The current plan is to increase the ratio of food waste to green waste feedstock in the compost. The shift in the ratio is only possible with the added covered aerated static pile system. Because the Greenery is located only a few miles away from neighbors, it cannot have odors or vermin. The technology will mitigate problems before they start. The extra green waste will be chipped, put through a pathogen reduction process, and sold as composted mulch. Mulch is increasingly popular, given the shift toward xeriscaping and low-water-use yards, and the high heat inherent in composting the product ensures that no weeds or pests can spread.

Ever the biologist, Ewert talks about compost with passion. “Compost is a living thing—it needs food, water, and air to make a quality product. If it gets too little or too much food, water, or air, you’re going to have problems.”

Together, the composting and food donation programs support San Diego’s compliance with legislation to divert commercial organic waste and statewide efforts to reduce methane emissions from landfills. As the population and economy continue to grow, San Diego’s proactive responses to changing environmental laws and cultural perceptions both engender and showcase the success of its organic waste program.