A brief history in waste management

Mid Valley Disposal started hauling solid waste in 1997. Jay Kalpakoff, the founder, was the third generation in his family in the business. In this endeavor, he was joined by his two sons, Joseph and Jonathan. They had two trucks and a nonexclusive permit to haul solid waste in Fresno County. They focused on core values of environmental responsibility, customer service, and community involvement, and the company grew. 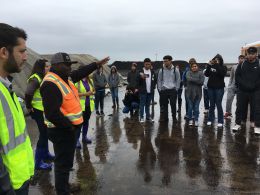 A pivotal point in the company’s growth came in 2006, when Mid Valley was offered the opportunity to operate a local landfill. While that venture would likely have been lucrative, the Kalpakoffs had misgivings. The writing on the wall was clear: The future belonged to diversion, not disposal. Recycling, composting, and other strategies to conserve resources and protect the environment were here to stay. Having a financial incentive to dispose felt wrong.

“Landfills are like any other solid waste business line. It’s a volume-based business,” said company Co-President Joseph Kalpakoff. “If we were to operate that business, we’d be looking at volumes, to increase throughput. … We made a conscious decision in 2006 by not being a landfill operator.”

Over time, MVD vertically integrated all the solid waste processing they had previously relied on others to handle. In 2006, they opened a transfer station and a single-stream processing line in Kerman. In 2012 they began expanding the facility in Kerman to include green waste processing. Now, they have 160 trucks, some powered by compressed natural gas, and 350 employees, all locally hired. They service some 89,000 residential and 25,000 commercial accounts in Fresno, Kings, Madera, and Tulare counties. 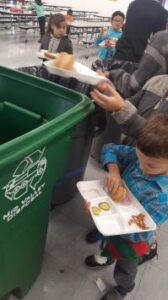 A pupil at an elementary school in Lindsay puts his food waste in the green bin after lunch. MVD provides outreach and education to all participants in the commercial food waste composting program.

In 2014, CalRecycle awarded Mid Valley Disposal one of its first grants for organics recycling infrastructure, funded by the California Climate Initiative. Today, that composting facility is up and running, the first new fully permitted green and food material composting facility in the San Joaquin Valley in a decade. With its integrated leachate capture system and lined stormwater pond, this facility provides maximum water quality protection. But the real benefits of this state-of-the-art facility are in the air quality realm. It features 16 composting bunkers, each with a Gore fabric cover and fully automated temperature and oxygen sensors connected to a low-horsepower blower. When the temperature gets too high or the oxygen levels get too low, the blowers kick on. MVD’s Gore composting system was recently certified by the San Joaquin Valley Air Pollution Control District to reduce volatile organic compound emissions from composting by 95 percent, a very big deal in one of the most impacted air basins in the country.

Hauler to compost operator: Talk to the air district early

As a hauler with contractual agreements to provide green waste recycling, Mid Valley Disposal was trucking green waste materials to a facility about 50 miles away. To reduce costs and pollution from transport, locating a composting facility at their transfer station made sense. One of the first crucial communications about that plan was with the San Joaquin Valley Air Pollution Control District, or APCD. This was an eye opener, Kalpakoff said, because that was when they learned about the valley’s “extreme non-attainment” status for ground-level ozone, a federal Clean Air Act pollutant. APCD rules require new sources of criteria air pollutants to purchase emissions reduction credits, in this case for the VOC emissions they would be emitting. The credits were expensive, so they needed the best air emissions control technology they could afford.

MVD toured facilities to assess their options. They liked the GORE covered system, which uses a fabric cover made of the same materials used in ski jackets and other outdoor gear. Gore offered them a pilot program—essentially a miniature version of the technology to experiment with using feedstock from their commercial routes and in Central California’s blazing hot summer climate. MVD obtained a research notification from the Fresno County local enforcement agency and added targeted residential co-collection of green and food materials in four of their contracted jurisdictions. The technology seemed to work well, so they began working on a composting permit. However, there was one major obstacle: landfill pricing in California’s Central Valley is very low, averaging around $25 per ton. The compost facility would require a tipping fee roughly double that amount. This cost would have to be passed along to ratepayers, which requires going to each city council or county board to renegotiate contract terms.

“You don’t just come up with the rate,” said Kalpakoff, noting that MVD has 27 franchise agreements. “You have to get jurisdiction buy-in. You have to go to the council. It’s not a one-meeting deal.”

The $3 million CalRecycle infrastructure grant came along just at the right time. The company had solid plans, and permitting was underway. By using the grant to reduce capital expenditures for the project, MVD was able to lower its projected organics tipping fee to something comparable to landfill tipping fees.

“If we didn’t get the (organics infrastructure) grant, would we be where we are today? Absolutely not,” noted Kalpakoff. “Using the grant to push down our tipping costs made this program a success.” 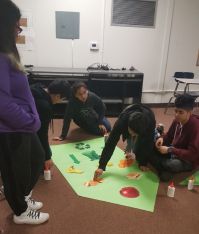 Signage can be tailored to the actual items that students throw away the most. In this case, students at Farmersville Jr. High make their own signs.

As MVD ramped up their pilot program and installed a full-scale GORE system with their grant funds, they learned to be flexible with their educational message. The program instructed residents to commingle food in their green bin with yard waste. Initially this included meat and dairy. Residents were understandably leery about placing these types of materials in the green waste bin. There were the usual concerns about rodents and odors, very real in a Central Valley summer. Furthermore, California was in the midst of a drought, and people were being told to cut down on water use; the need to rinse out green waste bins put folks in a quandary. More and more residents were placing bags in their green bins, causing major operational headaches. Mid Valley slowly adjusted the message, such as only including cooked meat, after learning that raw meats clogged their leachate lines.

“It was a learning curve as to what we would accept, because we were also learning about processing the materials,” explained Ivette Rodriguez, MVD’s recycling director.

It was a long process to educate residents to not bag organic waste. Rodriguez runs an outreach department that includes six recycling coordinators who reach out to customers in any way they think will improve success, including door-to-door. In the pilot program areas, they fanned out to inspect bins in neighborhoods suspected of being sources of contamination. They tagged bins. They knocked on doors when extreme contamination was found. Homeowners were usually surprised about the inspections, and not always pleased to be informed they needed to clean up their organics bin. The outreach team was trained to de-escalate situations, calmly explain program requirements, and offer solutions. Alternatives included using paper bags or freezing food scraps and emptying the frozen scraps into the bin on pickup day. Mid Valley started off not accepting compostable bags, but more recently has started accepting them from their large food waste generators.

MVD services 14 school districts, as well as Cal State Fresno. At large institutions, said Rodriguez, continuous education is necessary to reduce contamination. The outreach team will give as much training as a large site wants or needs; three or four meetings a year is typical. Mid Valley’s team customizes bin signage to reflect the products students or workers purchase and consume at a particular site. It takes about a year to get everyone at a large site on the same page, she said, but the greatest factor to increase success is having one or more program champions who can get others on board at each large site. “It takes the support of the leaders on site to continue the message,” according to Rodriguez.

To really drive home the message to commercial customers, on top of their educational program, MVD trains drivers on the organics route to report contamination when it is found. If a dumpster is too contaminated, the driver takes a picture of the open bin, which is uploaded to the customer’s account, along with the message, “This is what your bin looked like today. We’re going to dump it as trash.” The organics truck moves on, and a trash truck is re-routed to collect the bin. It may seem costly to re-route a trash truck to pick up a contaminated organics bin, but it makes business sense. “The back end cleaning is going to be more expensive than sending another truck,” Kalpakoff explains.

Food waste collection in California is already being driven by laws such as AB 1826 (Chesbro, Chapter 727, Statutes of 2014)—mandatory commercial organics recycling—but MVD has operational drivers as well. An adequate supply of clean food waste to mix with green waste allows Mid Valley to dial in a recipe, perfect its use of the GORE system, and compost with maximum efficiency. Given the area’s hot, dry climate, composting operations at Mid Valley require adding water. Because food is mostly water, increased food waste feedstock helps attain adequate moisture in the initial compost pile mix. All of this helps Mid Valley’s customers attain their solid waste diversion goals.

“I think we’re in a great spot, but as a business owner and a composter, I need the food waste volumes now,” said Joe Kalpakoff. “That is the challenge. We know it’s out there. How do we go get it?” With 27 franchises, and the upcoming SB 1383 (Lara, Chapter 395, Statutes of 2016) regulation package further cementing the need for food waste source reduction and collection, the food is definitely there. Keeping participation rates high, continuous education to reduce contamination, and effectively marketing the finished compost are the ongoing challenges.