Water is a scarce resource in California, a state with a history of extreme precipitation patterns and fluctuations between droughts and floods.  Climate change intensifies these extreme weather patterns, increasing rainfall intensity and soil erosion at the same time as the state’s ever-growing population impacts soil health.  The recent four-year drought, while relatively short in comparison to previous droughts, was unusually severe, resulting in depleted water supplies.  In response, the governor proclaimed a State of Emergency and issued an executive order directing state government agencies to take actions to conserve water.  State and local agencies, non-profits, and other stakeholders are working diligently to increase water efficiency in all landscapes, including residential, commercial, and agricultural.  Strategies include embracing graywater usage, restricting water use, increasing irrigation efficiency, developing rate structures and pricing mechanisms to maximize conservation, providing education and outreach, requiring agricultural water management plans and conversion of lawns to sustainable landscapes.  An extensive body of research demonstrates the positive effects of compost and mulch on water conservation.

Compost and mulch are part of the solution as California struggles to mitigate increased demand for water.  Incorporation of compost into soil and application of compost or mulch improves soil properties, moderates soil temperature, and reduces evaporation and water requirements for our urban, suburban, forest, and natural working lands. 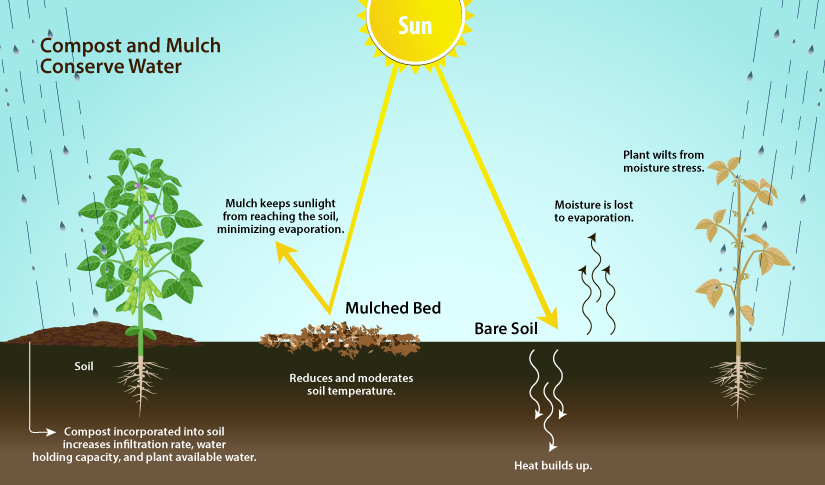 The following systems and treatments use compost and mulch for erosion control, stormwater management, and water conservation.

All agencies in California must adopt, implement, and enforce the Model Water Efficient Landscape Ordinance (MWELO) or an ordinance that is at least as effective in conserving water.  In California, landscape irrigation uses about 50 percent of urban water.  The MWELO requires efficient landscape design, including use of compost and mulch, to conserve water.  AB 2515 requires the California Department of Water Resources (DWR), by January 1, 2020, and at least every three years thereafter, to update the MWELO or make a finding that an update at that time is not useful.  Look for revisions to compost and mulch use at that time.

The use of compost and mulch to conserve water provides the following direct and indirect benefits:

How Compost and Mulch Conserve Water

Field and lab research conducted over several decades on incorporation of compost into soil and application of compost or un-composted organic materials onto the soil surface as mulch addresses its effects on soil properties, crop growth and yields, erosion control, stormwater runoff, greenhouse gas emissions, and carbon sequestration.  Most of these studies were not conducted with the primary goal of determining the effect of compost on water conservation (although some were), but this research provides data that is useful in estimating its effect.

NRCS estimates that one percent organic matter in the top six inches of soil holds about 27,000 gallons of water per acre.  This estimate is suitable for simple and rough estimates of potential increases in soil water-holding capacities associated with increases in soil organic matter where data on the many variables relevant to estimates are not readily available.  For example, it takes 23.5 tons of compost with 50 percent organic matter (average amount for California compost) to increase SOM by 1 percent to an average depth of 20 cm.  Using these assumptions, applying all 3.2 million tons of compost currently produced annually in California increases the amount of water held in soil by about 3.7 billion gallons.

Another potential method of estimating the effect of compost on available water capacities is using available data on soil organic matter prior to compost use.  Data on SOM in California and other state’s soils is available through the NRCS Gridded Soil Survey Geographic (GSSURGO) Database.  Use data on the percent of organic matter in the compost to be applied (e.g., from the USCC STA Technical Data Sheet) and determine the application rate.  An acre of soil to a depth of 20 cm weighs about 1,175 tons.  It would take about 23.5 tons of a compost containing 50 percent organic matter by dry weight (average for California composts) to increase SOM by one percent on an acre to a depth of 20 cm.  To determine a range for the increase in AWC associated with increased SOM, use a standard table on available water capacities based on soil texture and SOM.  For example, the midrange of AWC for coarse sand and gravel with SOM <0.5 percent is 0.03 cm water/cm soil and for SOM >3 percent is 0.05 cm water/cm soil, an increase of 0.02 cm water /cm soil or 67 percent.
NOTE: Saving Water Reduces Energy Use and Associated Greenhouse Gas Emissions.

A 2005 study by the California Energy Commission found that water-related energy use in the state consumes 19 percent of its electricity, 30 percent of its natural gas, and 88 billion gallons of diesel fuel annually. Reducing energy use has the co-benefit of reducing greenhouse gas emissions.

Research funded by CalRecycle on runoff from fire-damaged soils located on a 3:1 slope found that incorporation of compost into soil reduced runoff volumes when compared to controls by up to about 90 percent.  During a single storm event, incorporation of compost resulted in an estimated runoff reduction rate of more than 60 gallons per ton of compost.  Although reductions in runoff imply water savings, actual savings depend on slope angle, evapotranspiration rate, geology, and other factors.

Recharge of aquifers is a co-benefit of the use of compost and mulch to sequester carbon, control erosion, and improve agricultural soils. Recharge modelling is complex, depending on interactions between climate, geology, vegetation, and soil. Research on the effect of compost and mulch on water conservation tends to focus on plant requirements and may not take into account water below the root zone that ultimately can migrate downward to the groundwater table; For this reason, plant-based estimates are conservative approximations of total water savings.

Since the supply of compost and mulch in California is not enough to address all the needs, it is important to determine where to apply this resource to best conserve water and provide other benefits.

Available water capacities (AWC) of soil primarily depend on soil texture and soil organic matter content.  Loamy soils have the highest AWC while coarse sand and gravel have the lowest.  In order to conserve the most water with the limited amount of compost available, and taking into consideration the cost of purchasing and applying compost and mulch, CalRecycle recommends applications target the following:

The use of compost and mulch in agriculture should target high-value crops that require the most water per acre (e.g., orchards, vegetables, and tomatoes).