The Natural Resources Conservation Service (NRCS) defines healthy soils as those with the continued capacity to function as a vital living ecosystem that sustains plants, animals, and humans.  Construction, farming, and other human activities compact soil and deplete nutrients.  Compost and mulch improve soil’s physical, biological, and chemical properties and help soils regain their natural functions.

As the leading agricultural state in the nation, it is important for California’s soils to be sustainable and resilient to climate change. Increased carbon in soils is responsible for numerous benefits including increased water holding capacity, increased crop yields and decreased sediment erosion. In the upcoming year, the Administration will work on several new initiatives to increase carbon in soil and establish long term goals for carbon levels in all California’s agricultural soils.

In dry climates such as in California, increased water-holding capacity can reduce the frequency of irrigation needed to support crops. In addition, compost can help a soil decrease the loss of fertilizer, pesticides, and herbicides by erosion, leaching, and runoff.

The California Department of Food and Agriculture (CDFA), with funds from the State’s cap-and-trade program, provides financial incentives to California growers and ranchers to use practices, including application of compost and mulch, that sequester carbon, reduce atmospheric greenhouse gases, and improve soil health.  In 2017, CDFA’s Healthy Soils Program (HSP) Incentives Program awarded over $1.8 million in grant monies to 60 projects for compost use, alone or in combination with other conservation agriculture practices, on farms.  The 2017 Healthy Soils Program (HSP) Demonstration Projects awarded over $2.6 million in grant monies to 18 projects to study the effects of compost use on crop and grazing rangelands.

Compost in California contains approximately 50 percent organic matter, and of that, approximately 25 percent is carbon. Although plants generally consume carbon from the air, compost carbon nourishes soil microorganisms. Organic matter is composed of the remains of organisms, such as plants and animals and their waste products. The ratio of carbon to nitrogen (C:N) is a common index used for assessing feedstock and the maturity of any given compost. C:N ratios in finished compost range from 12:1 to 20:1 but are ideally between 14:1 and 18:1.

Compost increases organic matter in soils, which tend to be deficient in organic matter.  Soil structure—the arrangement of the solid parts of the soil and the pore space between them—is critical to how the soil functions. Organic matter causes soil to clump and form soil aggregates, which improves soil structure. With better soil structure, permeability (infiltration of water through the soil) improves, in turn improving the soil’s ability to take up and hold water. When the solid parts—sand, silt and clay particles—cling together as coarse, granular aggregates, the soil has a good balance of solid parts and pore space. Soil organic matter also helps develop stable soil aggregates. Fungi and bacteria produce organic glues as they decompose plant residues. Fungi fed with organic matter secrete a gooey protein called glomalin, an effective short-term cementing agent for large aggregates. Water-resistant substances produced by microorganisms, roots, and other organic matter provide long-term aggregate stability from a few months to a few years. 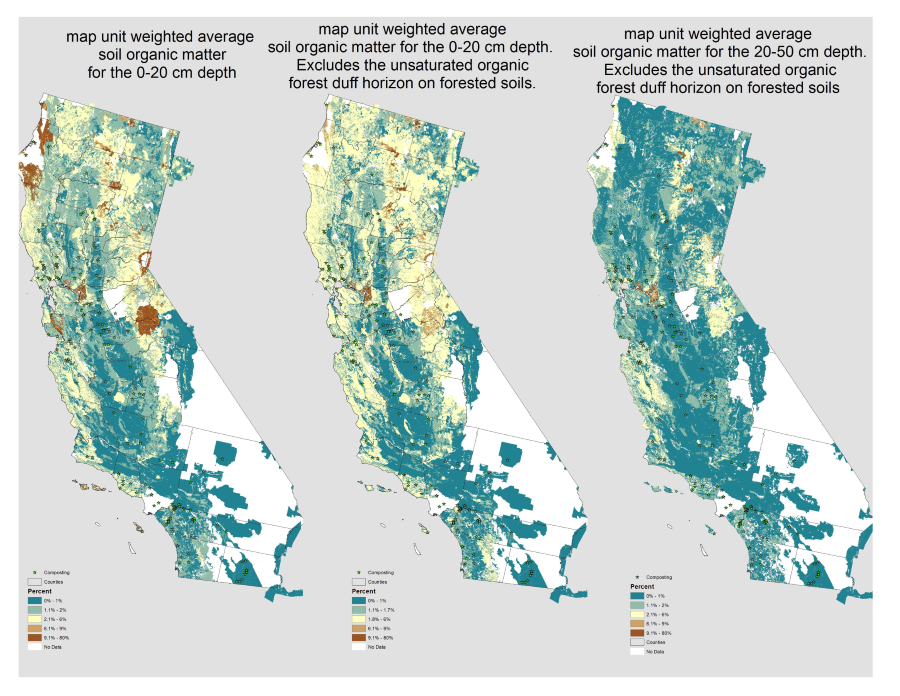 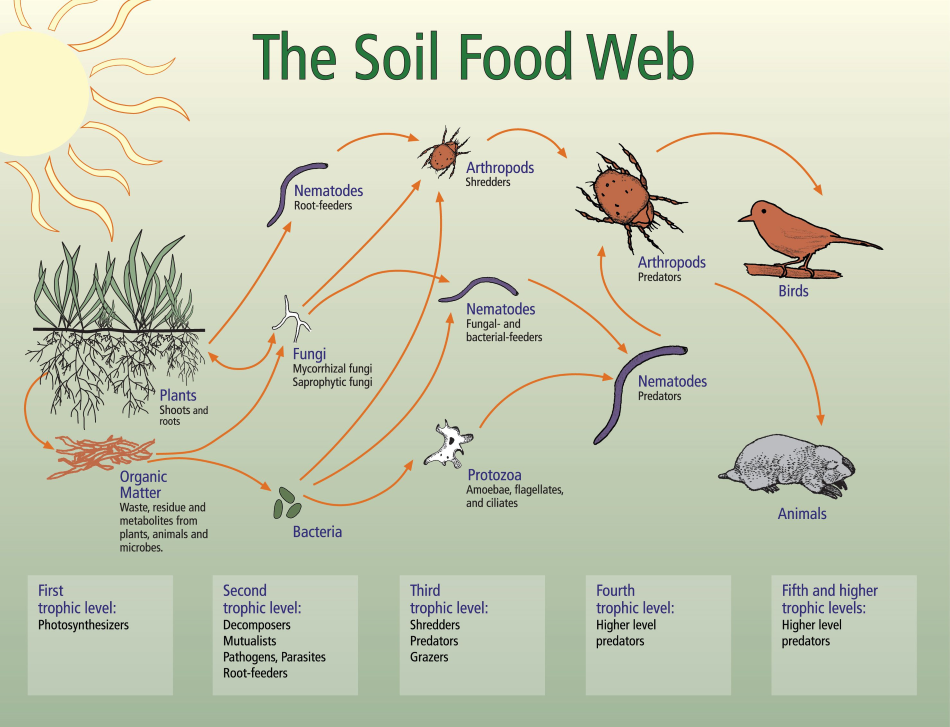 Soil, especially healthy soil, is full of life. Millions of species and billions of organisms make up a complex and diverse mix of microscopic and macroscopic life that represents the greatest concentration of biomass anywhere on the planet. Bacteria, algae, microscopic insects, earthworms, beetles, ants, mites, and fungi are among them.

According to the federal Natural Resources Conservation Service:

Consider bacteria, the soil microbes with the highest numbers, for example: you can fit 40 million of them on the end of one pin. In fact, there are more soil microorganisms (microbes for short) in a teaspoonful of soil than there are people on the earth. These microbes, which make up only one-half of one percent of the total soil mass, are the yeasts, algae, protozoa, bacteria, nematodes, and fungi that process soil into rich, dark, stable humus. Like other living creatures, the organisms in the soil also need food and shelter. Some feed on dead organic matter, and some eat other microbes. As a group, they cycle nutrients, build the soil and give it structure. 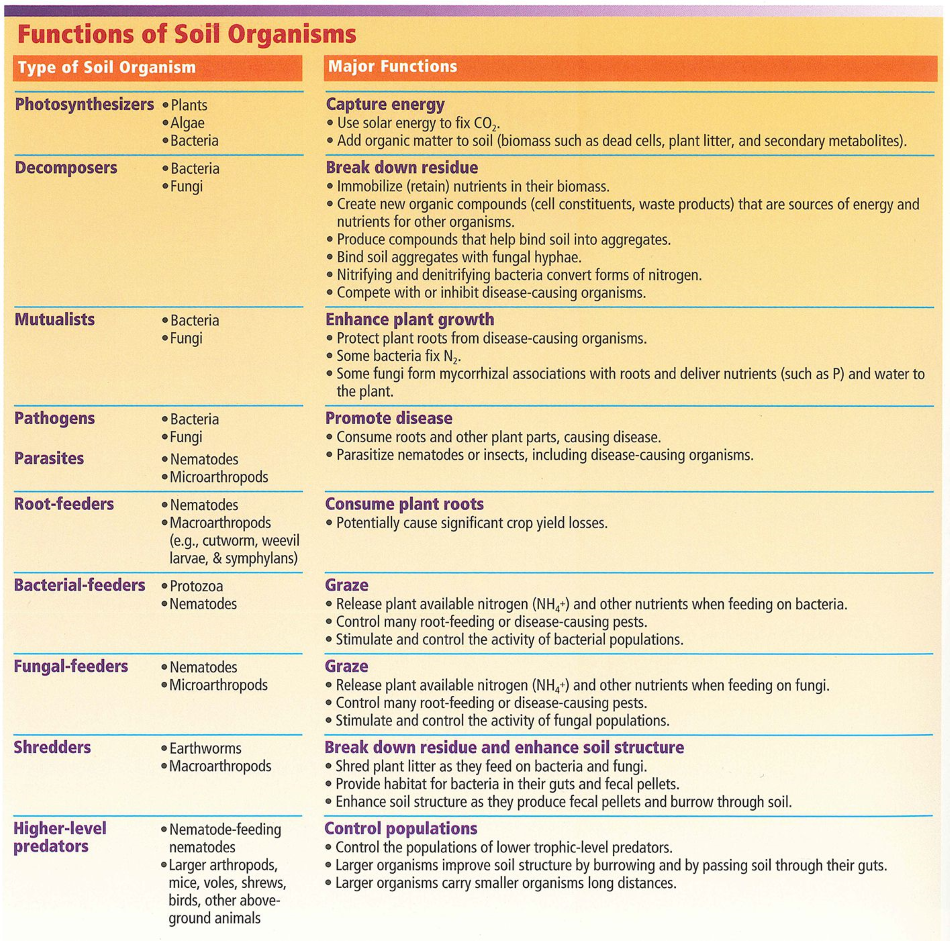 Numbers and Functions of Soil Organisms, courtesy of NRCS 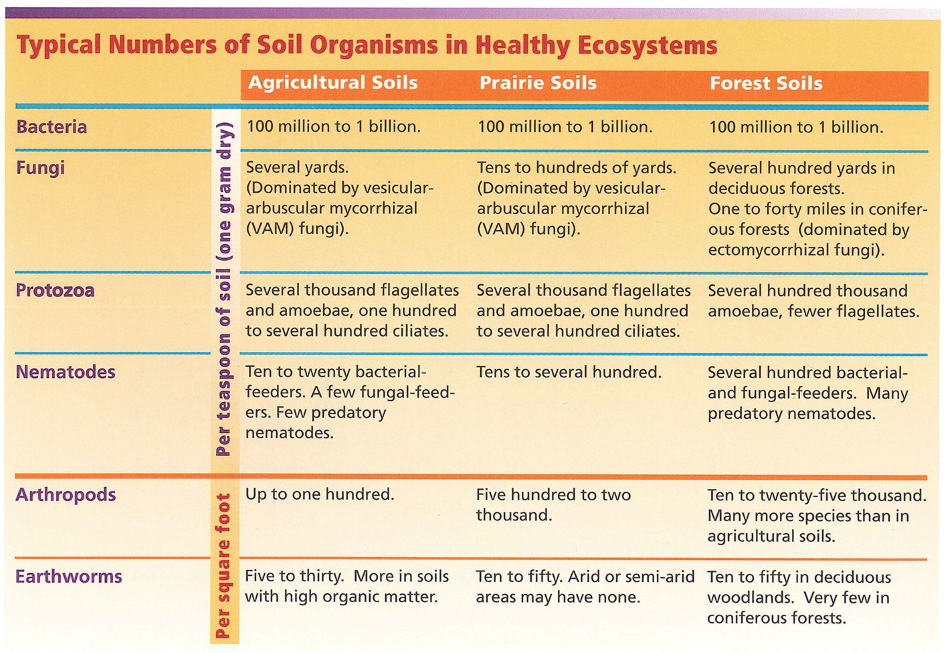 Numbers and Functions of Soil Organisms, courtesy of NRCS

What do Soil Organisms Do?