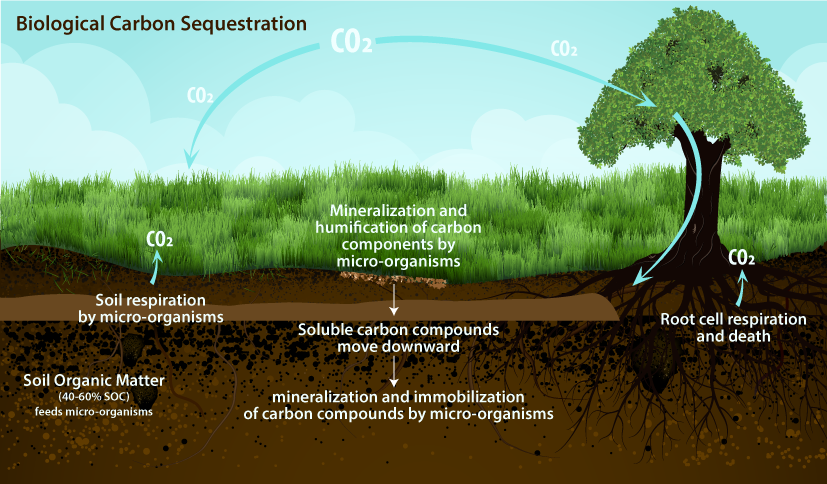 For purposes of this toolbox, biological carbon sequestration is the long-term storage of carbon in soils and vegetation resulting from applications of compost and mulch to land.

Soils hold more carbon than the atmosphere or plant and animal life combined. Climate experts say no strategy to reduce climate change is complete without using the vast carbon sinks available in the world’s soils. Over the centuries, human activities have degraded soil, resulting in the loss of a significant portion of their carbon content to the air.

Plant photosynthesis uses sunlight to combine carbon dioxide from the air with water and nutrients from the soil to produce plant materials both above and below the ground. If plant material is not returned to the soil—as is the case with urban expansion, deforestation, and agriculture—carbon dioxide is released into the air as a greenhouse gas. Land management practices contribute to about one-third of the surplus CO2 in the atmosphere that is driving climate change.

On the other hand, carbon can be stored long-term in soil through carbon sequestration by applying compost to the land. A series of experiments done in Northern California shows that one application of compost started a chain reaction of carbon sequestration that will last decades. Therefore, compost and mulch applied to many types of land may be the single greatest weapon in the fight to reduce the effects of climate change.

The Marin Carbon Project is performing a long-term experiment using large quantities of compost to improve forage on California rangeland. Early results suggest significant improvements in forage quality and quantity, benefits to native perennial grasses, and significant soil carbon sequestration. The work includes a suite of farm management practices to complement compost application in a manner that builds soil carbon and soil health and improves productivity. Each farm has developed a comprehensive carbon farm plan, including known climate-beneficial practices such as windbreaks, riparian and range management improvements, and grass, plant, and tree establishment.

Read about the ‘4 per Thousand’ initiative, launched at the Paris Climate conference, to implement practical actions on soil carbon storage and encourage the agriculture industry and other stakeholders to transition towards a productive, highly resilient agriculture that creates jobs and ensures sustainability.