Case Studies on Compost Use in Agriculture 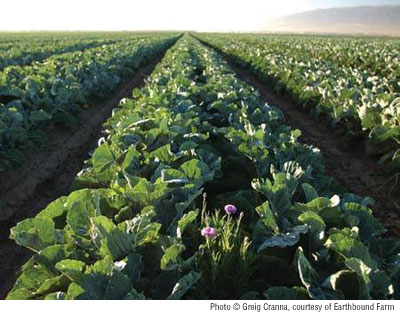 Earthbound Farm: Compost Use in Large-Scale Production of Salad Greens

Michael Brautovich has five watchwords when it comes to purchasing compost forEarthbound Farm, one of the nation’s largest growers of fresh salad mix and organic vegetables.

Earthbound and its network of cooperative farmers cultivate some 30,000 acres of fruits and vegetables, all of them organic, in California, Arizona, and Northern Mexico. That means they use a lot of compost, between 3 and 10 tons per acre, depending upon the crop and the soil, said Brautovich. Their products, such as the ubiquitous salad mixes now found in 4 out of 5 American grocery stores, are often eaten fresh, not cooked. That means zero tolerance for contamination.

So how does one integrate a product like compost—which is inherently variable, which is produced under conditions which are impossible to completely control, and which comes from feedstocks that are even harder to control—with a fully modern, large-scale organic production system with the highest food safety standards?

It’s all about risk management, according to Brautovich. Whether they are purchasing compost from permitted California facilities, or making it on one of their 150 affiliated farms, risks must be managed at all times. Title 14 of the California Code of Regulations is a start, but Earthbound Farm goes beyond that. All compost supplied to Earthbound Farm must have third-party certification. The third-party authority works with the composter to review process-water testing, feedstock separation, temperatures, curing procedures, and overall sanitation. Oftentimes, finished product is covered to keep out birds. When the product is delivered to one of Earthbound’s fields, it is tilled in right away, and is never allowed to sit. 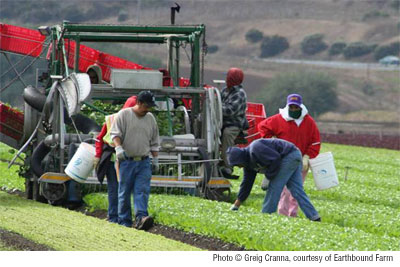 Testing procedures are based on the U.S. Compost Council’s Test Methods for the Examination of Composting and Compost (TMECC). In addition to zero contamination, Earthbound agronomist Gina Bella Colfer wants to see pH between 6.5 and 8.5, a carbon-to-nitrogen ratio less than 17:1, zero or minimal ammonia and nitrate, and zero nitrite. Seedling germination should be around 90 percent or better.

“Mostly we want compost to be very mature,” she said. “You want to be able to pot a plant in the compost; it should not be able to heat up. Immature compost does more harm than good.”

When testing for pathogens, Earthbound Farm goes beyond California Title 14 regulation for compost producers. In addition to fecal coliform and Salmonella, Earthbound requires testing for E. Coli O157:H7 and other “non-O157” forms of enterohemorrhagic E. Coli (EHEC). Testing for O157:H7 is in line with the requirements of the Leafy Greens Marketing Agreement, of which Earthbound Farm is a member. The agreement sets the same standard as the State of California for fecal coliform in finished product, 1000 MPn/gram, but has a 0 or “below detection limit” tolerance for Salmonella and O157:H7 . California Title 14 regulations have no standard for O157:H7 and EHEC and allows 3 MPN/4 grams for Salmonella.

Composted products must be applied more than 45 days before harvest, according to the agreement’s standards. Since the growing time of baby spinach and the tiny lettuces—which are one of Earthbound Farm’s signature products—is around 30 days, this means all compost for these crops is applied before seeding. Earthbound also uses a lot of custom compost blends, mixing organic materials such as gypsum or sulfate of potash into the compost as needed, and thereby reducing the number of passes over their fields, which saves fuel and reduces soil compaction.

“All compost applications are either done at the end of the cropping season or very, very early,” said Brautovich.

In addition to maturity and cleanliness, Bella Colfer is interested in the microbial biodiversity of her compost. They used to contract with a laboratory that would break down the types of microbes in the product, but that laboratory is gone and they have not been able to replace it. Currently, they use a lab which tells them the number of active and total bacteria, and fungi.

“If you are looking for certain bacteria but getting mostly fungi that compost may not work as well for you,” said Bella Colfer.

California’s Department of Food and Agriculture has strict rules on claiming microbial content for fertilizers or soil amendments, so composters in California generally do not make these claims. Earthbound Farm tests for these items after the product is delivered.

With regard to physical contaminants, the 0 percent contamination goal is mostly taken care of by a small screen size, down to as small as a quarter-inch.

As for compost feedstocks, Earthbound Farm is fully organic, so biosolids are out. Foodwaste is also out because it has too many contaminants. Animal parts are out. “Clean Green” urban greenwastes are good, as is dairy manure, agricultural wastes, and the plant residues left over after ginning cotton. All of the vegetative material from their massive packing plant in San Juan Bautista is either sent for composting or to feed cows.

What do Brautovich and Bella Colfer see as the main benefits of composting? To start with, all of Earthbound’s acreage is organic, and organic farming production plans generally require continuous efforts to build the soil. Compost is one of the best ways to do that.

Brautovich and Bella Colfer are confident they are building soil organic matter over time, and cite that as a prime benefit, though they admit that one has to spread a lot of compost to measure that benefit. They cite inoculating soil with microbes as the second biggest benefit. And since Earthbound closely monitors water use in fields, they know when they are saving water and increasing soil water-holding capacity, the third major benefit.

Risk is inherent in an industry feeding fresh salads to millions of people daily. Earthbound Farm helped create this market with their innovative methods of growing, harvesting and packaging fresh salads. The company racked up sales of more than $460 million in 2012, according to Moody’s.

In 2006, an outbreak of E. Coli O157:H7, which was traced to spinach grown in California’s “salad bowl,” put this amazing success story at risk. The bagged salad industry had a crisis on its hands; Earthbound Farm and other growers recalled product worth millions of dollars. By the time the outbreak ran its course, three people were dead, and 199 were sickened, including 31 who developed a form of kidney failure. E. coli O157:H7 was found in environmental samples just under one mile from the spinach field; however, no definitive determination could be made regarding how E coli O157:H7 pathogens contaminated the spinach.

In response to this contamination, public health officials and supermarket managers demanded change. The salad industry, which had been undergoing tremendous growth, had to step back, re-evaluate, and enhance their safety procedures. Out of this effort, the Leafy Greens Marketing Agreement was born. Today, nearly all major producers of fresh salad products are members of the marketing agreement, and subscribe to its standards. Some go beyond that. Earthbound Farm greens, for instance, are double-tested for harmful bacteria: once when they come into the packing house and again after they are packaged. The washing process is so thorough that they actually recommend that you do not wash their salad mixes at home because you are more likely to contaminate them than get the greens any cleaner. The lack of outbreaks from fresh salad products over the past few years seems to indicate the controls are working.

Earthbound Farm’s mission is to bring the benefits of organic food to as many people as possible and serve as a catalyst for positive change. Earthbound Farm encourages every operator to do rigorous assessments of their own operation and develop programs that address the risks that are identified. Food safety and organic integrity does not stop at Earthbound’s farm or facility. Earthbound adds: “We must coordinate our efforts throughout the entire supply chain to make real progress and reduce the risks that we know exist.”